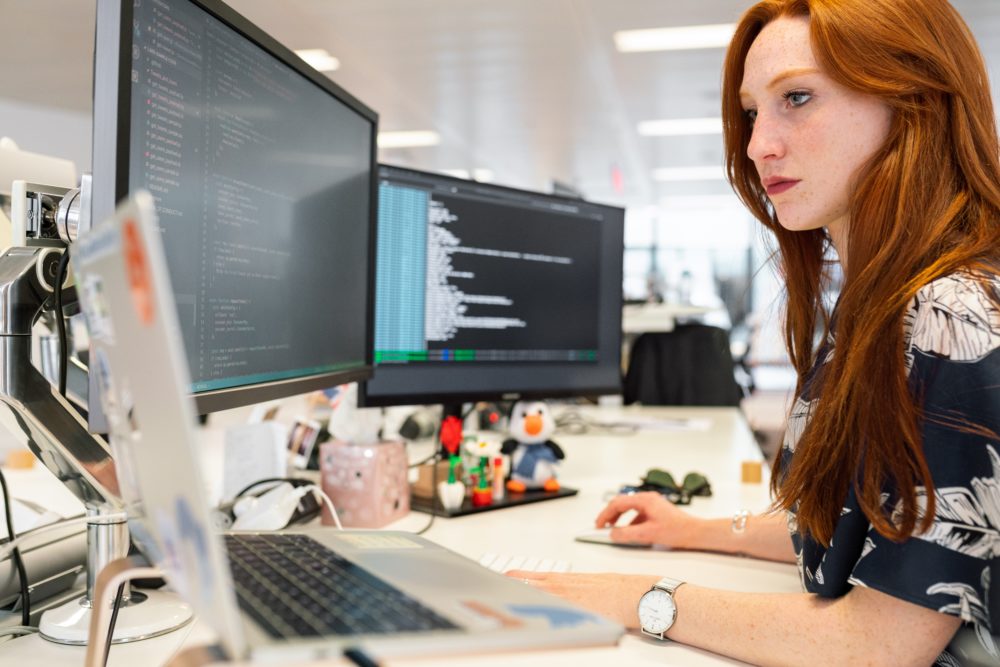 Freelance programming jobs are an excellent way to earn a second income while working from home.

Before we go on, what is a Freelance Programming Job?

A freelancer works as an independent contractor on their terms and not under any organization’s direction or control.

An individual client or company can hire them, but it doesn’t matter if they work from the office or home.

The most thing is that you enjoy what you do.

This article is for people who want to know about the best freelance programming jobs for beginners.

Many freelance programming jobs for beginners are available, which can be in any field you want.

You need to know your area of expertise and what kind of projects pay the most money these days. The list below contains the best freelance coding jobs that have been reviewed by experts as well as freelancers themselves who have been successful at finding work online:

A web developer specializes in developing websites and web applications.

Web developers are responsible for designing and developing your website or application pages so that they look good on various devices such as desktop computers and smartphones or tablets.

They also need to make sure that their site works when viewed from different browsers, such as Firefox or Chrome, etc., without any problems!

As an IT Consultant, you will be responsible for helping companies with their technology needs.

You can work in various fields like software development, web design, and maintenance of existing systems.

It is best to have at least some experience working as an IT consultant before trying to get a job as one.

If a person does not possess the right skill set for this position, it is best to undergo training or take courses online until they can earn their credentials and start working on more advanced projects.

Front-end developers are the ones who work on the front end of a website.

They are responsible for the design and development of the user interface.

Therefore, they can also be called front-end developers or UI Developers.

A full-stack developer is a software engineer with expertise in front-end and back-end development.

Full stack developers have responsibilities for all aspects of an application’s development, from the database to the user interface.

They can be found working on large projects that require multiple team members or smaller companies with only one or two developers.

The role of a data scientist is expected to be proficient in statistical analysis, machine learning, and data visualization.

Data Scientists are usually employed by companies that require their skills for handling large volumes of information from various sources.

They use their expertise in math and science to find patterns in extremely large data sets, which can help them gain valuable insights about customers and products.

If you’re interested in programming and want to make it your career, you should consider becoming a Mobile App Developer.

The job involves developing mobile apps for smartphones and tablets.

A Mobile App Developer is responsible for creating the user interface, defining the interaction model, writing the code, and testing the application on various devices.

UX/UI designers are responsible for the look and feel of a product.

They work with different clients to understand their requirements, then design a solution.

They’re responsible for the visual design of a website or application.

Technical writing is a career that requires you to write clear, concise, and accurate instructions or procedures for other people to follow.

It is a job that requires a lot of research and patience. In addition, you need to be able to communicate well with your clients.

An example of technical writing will be if someone asks you how they can build their website or app.

This type of question would fall under technical writing because it involves explaining something in detail so someone else can successfully do it in the future – like an instruction manual!

The Unity3d job market is booming, with over 7 million dedicated users worldwide!

You can find freelance jobs on Upwork or Freelancer if you want to work from home or remote locations.

If you wish to learn how to create your own games using the popular game creation software, this may be the perfect opportunity!

QA Engineers are responsible for testing software applications and ensuring that they meet the requirements of their clients.

They also help improve the quality of existing software by identifying problems and suggesting solutions.

As such, they play a vital role in ensuring that your company’s products are bug-free and error-free when it comes time to release them into the market.

The main tasks of a QA engineer include testing new features before they’re released.

The DevOps engineer is a software engineer who works closely with the development teams.

They are responsible for automating applications’ building, testing, and deployment processes. This role requires proficiency in using tools like Jenkins or Gitlab CI/CD systems to manage code deployments across multiple environments such as staging, production, and QA (Quality Assurance).

The skills required to become a DevOps engineer include:

A game designer is responsible for creating a video game’s rules and mechanics game.

They also ensure that these elements are balanced, fair, and fun.

A game artist creates the visual aspects of a game, including art, animations, sound effects, and music.

One can use art in different parts of the industry, such as advertising or film production.

A game programmer writes computer code that controls how everything works within your game, including its graphics engine(s), physics engine(s), UI system, etc.

They may also write helper tools such as debugger tools (which help debug your program) or profilers (to help optimize performance).

The job market for back-end web developers is expected to grow quickly through 2022.

However, salaries vary depending on experience level and location.

Data science is the process of preparing data in a way that people can analyze.

Data science aims to discover patterns and make predictive models for deciding what will happen next based on those patterns.

Data scientists need to know how to extract information from their own or other people’s data sets (for example, from surveys).

They also need to understand how algorithms work and how they are used in different contexts.

The algorithm is a given set of rules or procedures to be followed in calculations or other problem-solving operations, especially by a computer.

The word algorithm derives from the Greek root αλήθεια “truth” and γράφω “to write” because an algorithm can be expressed as a finite list of instructions written down by hand.

In competitive programming competitions, you will have to write code to solve problems presented to you during the match.

You might even have the ability to write your algorithms!

These are some of the best freelance programming jobs you can do with minimal experience and knowledge of computer programming languages.

If you have been looking for some freelance programming jobs as a beginner or experienced programmer, then this article is for you!