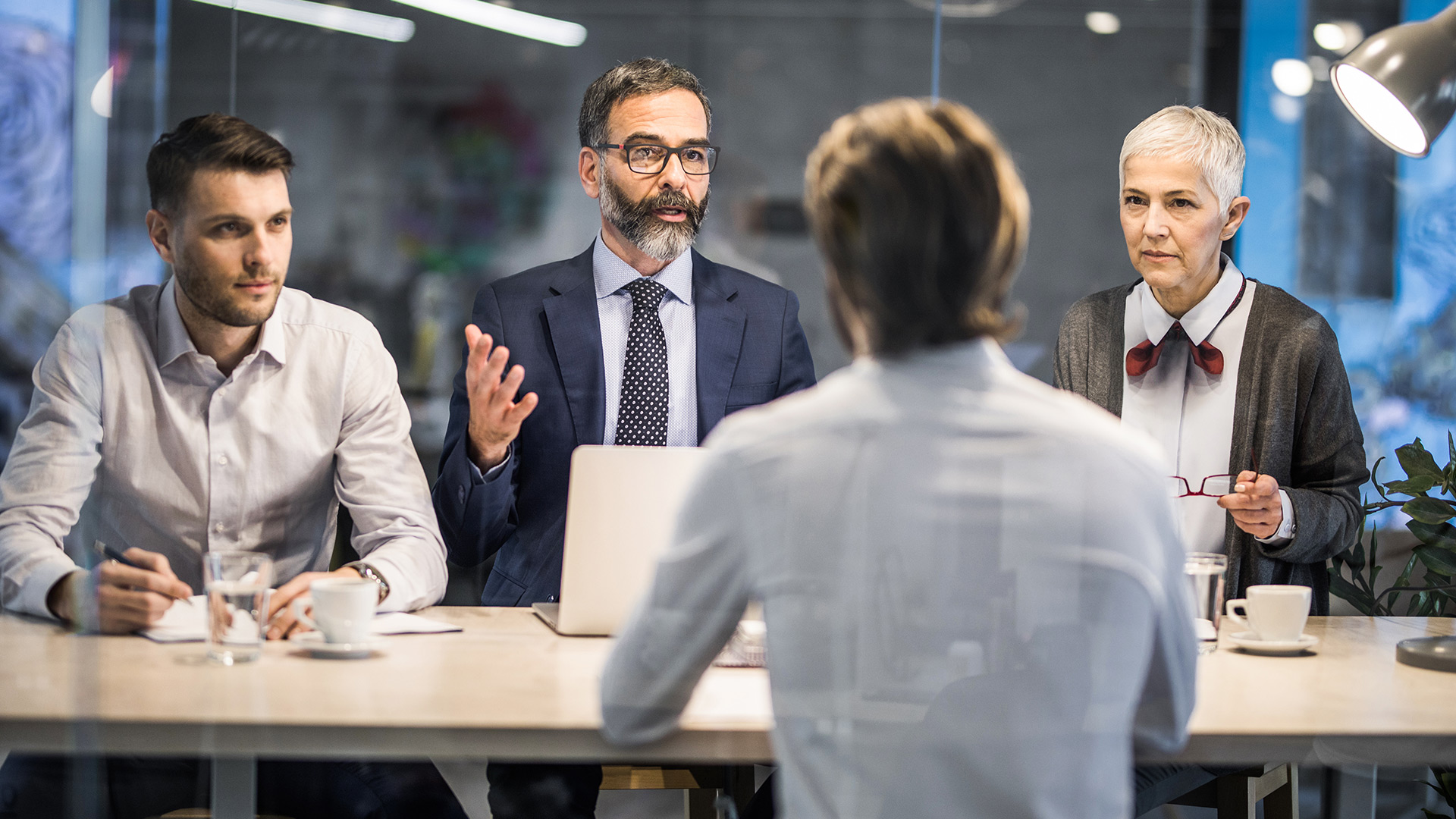 When you’re interviewing for a job, one number matters most: how many interviews for one job offer?

But what exactly is the right number? Is it two or three? Five? This is where it gets tricky.

It depends on so many different factors, including the role itself and how well-known your firm’s hiring needs are, that there isn’t one universal answer to this question.

Read Also: 20 Best Places That Hire You at 15 Years Old or Less

Why Jobs Have Multiple Interviews

Jobs have multiple rounds of interviews, so employers may offer you more than one person on the team.

They want to get more opinions before they decide whether to offer you a position, and they want to give you a chance to learn about their organization and make sure it’s the right fit for you.

What Percentage Are Granted Interviews?

When you consider the average online job posting receiving 260 resumes, only a small percentage of applicants make it to an interview.

Since most employers interview fewer than 10 applicants for a position, on average, only 2-3% of applicants make it to an interview.

However, there are exceptions. If the job is not posted online and you found it through networking or by talking to the employer directly, your chances are much higher.

If someone refers you to a hiring manager and recommends that they talk to you, your chances are also much better.

It is the sole reason it is so important to the network when looking for a job rather than relying solely on online search engines.

So while an employer will never interview 40 or 80 people for a job opening, you can increase your chances of being among the 2-3% who get an interview by networking.

You can also increase the number of interviews you get by tailoring your resume to the position.

How Many Interviews For One Job?

Generally speaking, two to three interviews before receiving an offer is a good number.

The hiring process can be complex and time-consuming, which means it’s important to find a company that’s right for you.

You’ll have plenty of choices when it comes time to apply for jobs; some companies may have trouble filling positions because they’re small or have limited budgets.

In addition, some jobs require more specialized skills than others, and a computer programmer might only need one interview, while someone with similar experience may need three or four.

It all depends on your specific situation: what kind of position do you want? How much experience do you have? What sort of compensation package are they offering?

All these factors affect how many interviews you’ll need before getting hired into the role that interests your most.

When you consider just how many people at a company are involved in the hiring process, this number makes sense.

The hiring process is a long and involved one.

It’s important to have multiple people involved in the decision because each person brings something different to the table and thus has a different perspective on you as an applicant.

As more people interview you, they will be able to tell exactly what kind of employee they want for their company.

This means there is less chance for miscommunications between the interviewer and candidate, which means less stress for everyone.

In addition, having more than one person interview your resume (or even one) gives you more information about what type of culture would work best at this organization:

Are they looking for someone fun or serious? Do they like technology? Does it matter if I’ve worked with animals before?

If only three people are interviewing me, but two of them are women, then maybe I should apply somewhere else where no women are working.

If you’re searching for a senior-level role, however, you should expect more interviews, perhaps up to five in total.

Senior roles often have more people involved in the process and require more time to make a decision.

These are also complex positions that will require more time for training and development, not just for the person who gets hired but also for everyone else on their team.

You may need several rounds of interviews before landing an offer from your first-choice company or manager.

This is because it’s not unusual for companies and managers to change their minds about who they want to hire over several days or weeks during this stage of the process.

At the end of the day, there is no magic number of interviews; it varies based on the position and the company, but in most cases, more than three is unnecessary.

More than three interviews will not necessarily give you a better sense of whether or not this particular role is right for you and if it isn’t. That’s okay.

You can always move on to another opportunity or consider taking an unpaid internship at your favorite company until something better comes along.

How Many Interviews For One Job | Answered

In general, 2-3 interviews before receiving an offer is a good number to aim for. The number of interviews will increase significantly if you’re looking for a senior-level role.

The same goes for companies that hire out-of-towners or those with specific requirements (e.g., high school graduates in certain fields).

The biggest variable here is your current situation: what position are you applying for? Are there any specific requirements or qualifications needed? What are the company’s hiring practices like overall?

These factors all come into play when determining how many times an interviewer should ask you questions during an interview process, and there’s no magic number either.

It varies based on your experience level and other factors, such as whether or not they’re getting back to applicants quickly enough after sending out invitations.

If so, then perhaps fewer rounds would make sense since candidates may feel unsure about whether they will be considered at all until they hear back from each stage, which won’t happen immediately.

Is It Normal To Have 4 Interviews For A Job?

Jodette Cleary, HiPages’ Chief People and Innovation Officer says three to four interviews are usually ideal, depending on the seniority of the role. Here’s how that process might look.
“This creates an expectation where you can share high-level information about the company, the role, and the salary budget,” says Cleary.

How Many Interviews Do You Need For One Job?

For entry-level positions, one interview can provide enough information to make a decision. For mid-level positions, two interviews may be sufficient.
Companies can use three for a higher or higher level. Organizations can sometimes justify using the fourth interview to make a final decision between two highly qualified candidates.

How Many Interviews For A Job Are Too Many?

While there is no rigid rule, aiming for one to three interviews, depending on the level of the position, is a wise move.

Is It Ok To Have 3 Interviews?

If you are invited for a third interview, this is a great sign – it indicates that your previous interviews went well and you are on the shortlist of job applicants. The third interview is used to ensure that the applicant is a good fit for the job.

Why Do Companies Have 5 Interviews?

Trial and error are bad and expensive for hiring companies, so they often compensate by making the hiring process more and more forensic. This means conducting multiple interviews to gain valuable information to help them more clearly determine which candidate has the most potential.

Is 4 Rounds Of Interviews Too Much?

A Google survey found that interviewers had 86% confidence in the candidate after the fourth interview. After that, trust increased by less than 1% with each subsequent interview. Furthermore, in 94% of cases, whether candidates were interviewed four or twelve times, the hiring decision remained the same.

Is It Normal To Have 7 Interviews For A Job?

A typical employer will interview 6-10 job applicants, and applicants will go through at least 2-3 rounds of interviews before receiving an offer.
If the hiring manager doesn’t find someone who fits their requirements among the first 6-10 candidates, they may interview more.

Why Do Companies Do 2 Interviews?

A typical employer will interview 6-10 job applicants, and applicants will go through at least 2-3 rounds of interviews before receiving an offer. If the hiring manager doesn’t find someone who fits their requirements among the first 6-10 candidates, they may interview more.

Does A 2nd Interview Mean I Got The Job?

A 2nd interview is a great sign, but it doesn’t guarantee you the job. Every organization is a little different when it comes to its hiring practices.
Some companies require several rounds of interviews before extending an offer to anyone, while others only require a second in-person interview to close the deal.

Is It Ok To Ask How Many Candidates Are Being Interviewed?

It’s OK to ask the interviewer how many other people are in the same position. You just want to know the people you are up against like anyone else.
But even if the questioning is harmless, the way you ask the question can annoy the interviewer.

Generally speaking, two to three interviews before receiving an offer is a good number. When you consider just how many people at a company are involved in the hiring process, this number makes sense.

If you’re searching for a senior-level role, however, you should expect more interviews, perhaps up to five in total.

At the end of the day, there is no magic number of interviews; it varies based on the position and the company, but in most cases, three or four is unnecessary.