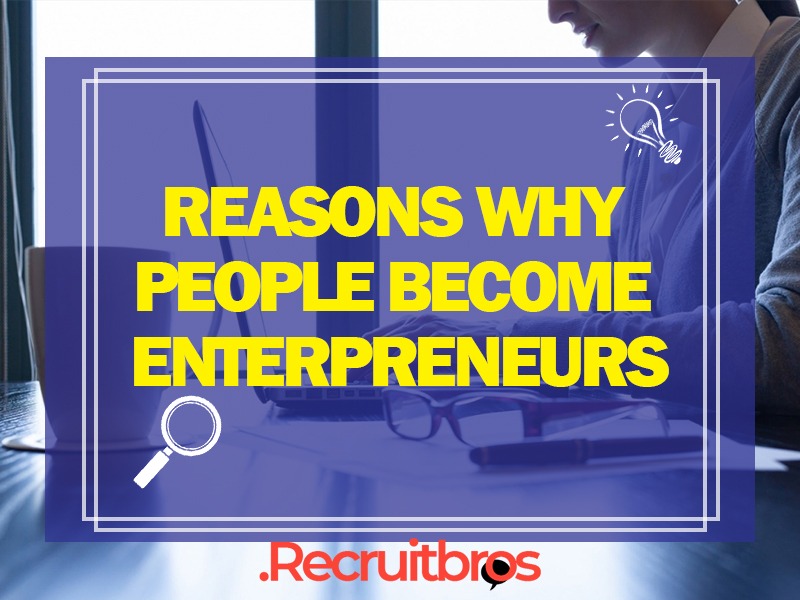 It is not for the faint of heart to embark on a career as an entrepreneur. Starting a small company allows you to follow your dream while still requiring you to make concessions, such as diligent budgeting and working longer hours outside of the conventional 9-5 routine, to achieve your objectives.

However, as more and more people turn to entrepreneurship each year, this commitment in time and resources pays off, despite these sobering statistics, thousands of people launch their own companies every year.

Read Also: Are You Being Sued: Complete Guide To Handling A Business lawsuit

An entrepreneur will be inspired to start a company because he believes that if he can manage his fate, he will be more competitive. He wants to be involved in every part of the company’s operations.

The entrepreneurs aspires to be members of the product design team, as well as distribution, marketing, engineering, and manufacturing.

An entrepreneur has a very clear vision of how a profitable enterprise can be managed. This thought alone drives him to start his own company and become personally involved.

Unlike company employees, who often only communicate with their coworkers, entrepreneurs get to collaborate directly with their clients.

According to The Business Journals, some founders start their own business because they want to be their manager and be in charge of all of the company’s day-to-day activities. The founder aspires to be the one who makes critical strategic decisions and steers the company in the right direction.

Reaching decisions on product growth and marketing, as well as being in charge of all aspects of the company’s operations.

Many entrepreneurs who seek to be leaders get motivation from the thirst for power. When you own your own company, you get to make all of the decisions, from who gets a promotion and at what salaries to what new strategic paths the company takes.

You’ll have the privilege of charting the company’s path, but if it fails, you’ll just have yourself to blame.

Knowing you built a profitable company and gaining the admiration of peers and business acquaintances are two things that inspire people to start their own business. They believe they provide a valuable service to their customers and take pride in doing the best job they can.

Many businesses give back to their families by donating to charities and attending charity activities. To start a company, you must feel a sense of achievement and pride.

Read Also: The Best Way to Find Companies to Work For

Some founders are compelled to start their businesses due to financial constraints. If a job does not pay well enough, an entrepreneur will start a side hustle to supplement income and eventually grow into a full-time company. This also occurs as people know that beginning a company is not expensive

You can dispute it all you want, but the vast majority of entrepreneurs enter the game to make a lot of money. Entrepreneurial legends such as Richard Branson and Mark Zuckerberg make it look as if any ambitious person with a bright idea will become a billionaire overnight.

This isn’t entirely real. Any dedicated capitalist with a brilliant idea and excellent planning will make a lot of money than they will in a conventional job. There’s nothing wrong with seeking riches, but if it’s your only motivation, you can get disappointed if you don’t make a profit in the first few years.

Since they are tired of the pressures of traditional jobs, developers strike out on their own. Working long hours, listening to the whims of the bosses and customers, and getting trapped in the same old rut of tasks are all part of the job description in a high-level role.

In the realm of entrepreneurship, being your boss frees you from those constraints. You will set your priorities and duties, as well as work your hours and from anywhere you choose.

Just keep in mind that entrepreneurship is highly demanding, especially in the early stages of development, so working your hours does not necessarily imply working fewer hours or under less stress.

In reality, many people feel that as entrepreneurs, they work harder, faster, and under more pressure, than they did as employees — but it’s still satisfying.

Read Also: How to follow up after a job interview [Complete Guide]

Living for someone is something that some people like. They enjoy the excitement of team-based collaborative problem solving. The interactions between mutually cooperative, knowledgeable individuals, and the excitement of working together to achieve success.

Some positions have direct supervisory or leadership responsibilities, but nothing beats building your squad from the ground up.

You pick your corporate partners, advisors, core staff, and even your first round of subsequent employee hires as an individual entrepreneur. That means you’ll be able to choose the ability sets, abilities, and personalities in whom you want to collaborate.

You’ll never have to think about being assigned to a team in whom you don’t get along or for whom you can’t be efficient.

Read Also: How to fire your boss.

Entrepreneurs aren’t so much interested in the capital or the experience as they are in leaving a permanent legacy. Entrepreneurs would like to be the face of a company and gain some notoriety in the process. They might want to leave, something that shows how much they are appreciated.

They might also want to hand the company on to the next generation. The argument is that they want to build something lasting that would outlast them. This is one of the most powerful motivators for entrepreneurs. It can’t be obtained in any other way, and it lasts even longer than money or experience.

Which of these motivations is the most important to you? Hopefully, more than one of them is motivating you. The more inspired you are, the less intimidated you will be when the unavoidable obstacles arise along the way.

Before you dive into the realm of entrepreneurship, consider just what you want to get out of the trip. Before you get engaged, learn about your motivations; you’ll be happier in the long run.