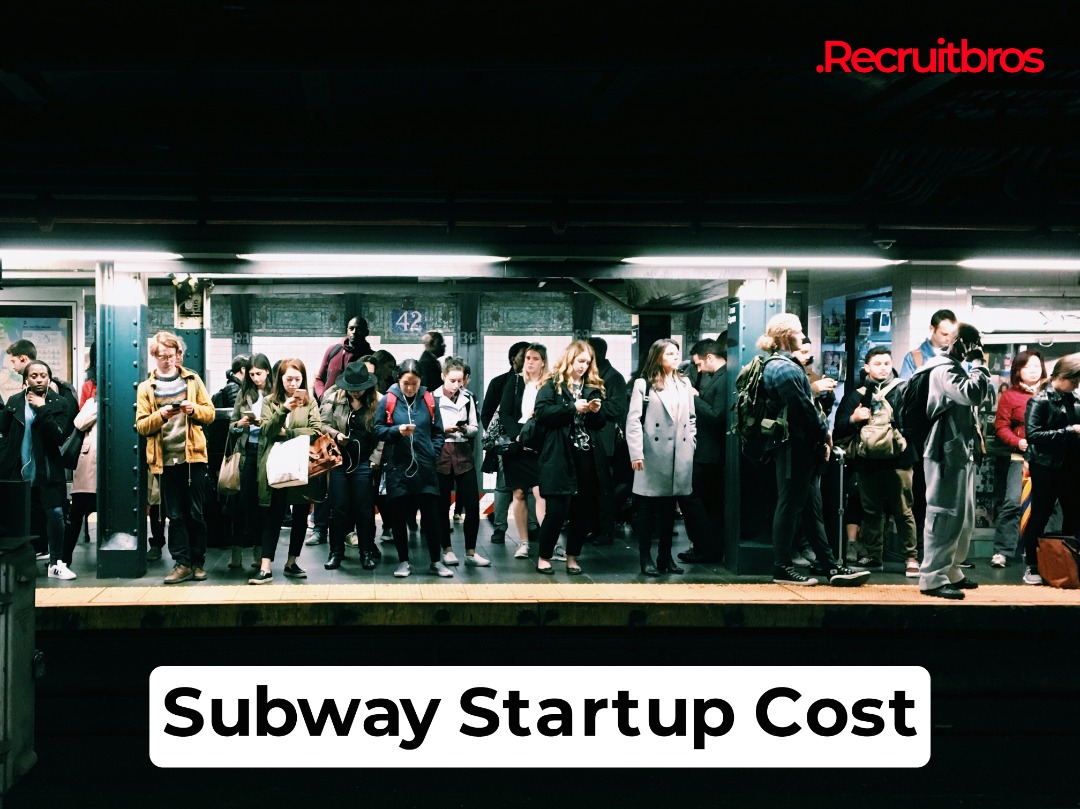 How you ever wondered what the subway startup cost could be? In this post, I’ll answer the question and tell you everything else you need to know about opening a subway.

That’s not all; you’ll also discover:

The best way to proceed by purchasing an existing Subway franchise

What is the best way to launch a subway franchise?

There are several Subway franchise opportunities to select.

So, if you want to start a subway franchise this year, this guide is for you.

It is also one of the least expensive big fast-food franchises.

How Much Does a Subway Franchise Cost?

If your Subway application offer is approved, you will be required to pay a franchise fee of $15,000 to use the Subway brand.

According to the firm, such startup costs may include building and machinery lease costs ranging from $105,800 to $393,600.

As opposed to a restaurant like McDonald’s, which needs as much as $2.2 million in opening costs alone, as well as a $45,000 franchise fee, we may conclude that Subway restaurants are much less expensive to open.

Subway restaurants often do not make as many sales as McDonald’s units.

A subway restaurant produces an average of $422,000 in profits per year, equivalent to $2.6 million for McDonald’s restaurants.

Subway restaurant franchisees are paid an annual royalty fee of 8% of gross revenue and a promotional fee of 4.5% of Subway sales reported by Franchise Direct.

This means that 12.5% of each restaurant franchise’s income is returned to Subway Corporate.

Subway’s franchise fee is essentially a cover charge for entering the scheme and taking advantage of the franchisor’s experience.

The franchise charge for Subway is payable in full the moment the franchise agreement is sealed.

For eligible US veterans who decide to buy a franchise, the brand is currently offering a discount on the franchise price.

Subway franchisors can also fund $10,000 of the franchise fee if the franchisee is buying their first franchise and meets the requirements of a minority loan scheme.

A comparable loan scheme may be made available to franchisees buying a franchise in a low-density market.

Subway also offers a $5000 discounted franchise fee to franchisees who choose to open a satellite restaurant. However, if the satellite is only going to be operational for a year, the fee may be limited to $1000.

Subway franchise fees are entirely for satellite restaurants housed in the same facility as the main Subway restaurant.

Subway is now waiving the initial franchise charge for oil industry stores and school lunch sites with at least 50 units that can turn an existing sandwich business they own and run at their plant into a Subway restaurant.

Variations in the final Subway franchise expense and benefit are determined by factors such as real estate prices, the scale of the Subway restaurant being opened, repairs that must be completed, and certain other factors such as the amount of traffic the restaurant receives during its initial months.

This is a rundown of the expense and benefits structure for a Subway franchise::

Subway restaurants have proved to be a top-performing business chain and have piqued the interest of many people.

This liquid asset condition is the amount of money that a franchisor recommends a franchisee have in reserves to reach immediately in the event of an emergency or setback before starting the company.

It also pays for the Subway franchisee’s daily living costs before the franchise unit generates a profit big enough to earn a sufficient take-home income.

When submitting a copy of the Subway franchise brochure, you will be asked to have some information to help you get started on your Subway trip.

However, please keep in mind that completing the questionnaire for your Subway franchise brochure would not obligate you to buy the franchise.

Only information about Subway franchise opportunities you will receive through this form.

You and your boss or designee will attend a 2-week intense program until your application request is processed.

Things to Expect When Your Subway Has Been Accredited:

Subway now has over 44,800 stations worldwide.

Subway franchise opportunities put in place by the venue, scale, and degree of renovations necessary. The types of Subway franchises divisions may include:

A typical Subway restaurant is one that you can find in a standard shopping centre or on a street corner.

You can find a non-traditionally Subway restaurant in airports, hospitals, bus stations, schools, truck stores, or other locations together with different business operations.

The fact that you own a convenience store or some other non-traditional venue gives you an advantage when purchasing a Subway franchise for that location.

Subway is keen to operate environmentally and economically conscious restaurants and operations.

The brand manages its enterprise in such a manner that it generates revenues for its different franchisees while minimising its environmental effects, thus enhancing the lives of its clients, distributors, franchisees, workers, and communities worldwide.

Subway sandwiches and the Subway company are well-known, allowing it to be a top sales leader in the fast-food sandwich industry. Subway had revenue of $10.4 billion in 2018, according to the most recent available data.

A Subway franchise is a good choice for entrepreneurs who love opening a franchise business because it has the advantages of an existing business, low investment costs, and parent company sponsorship.