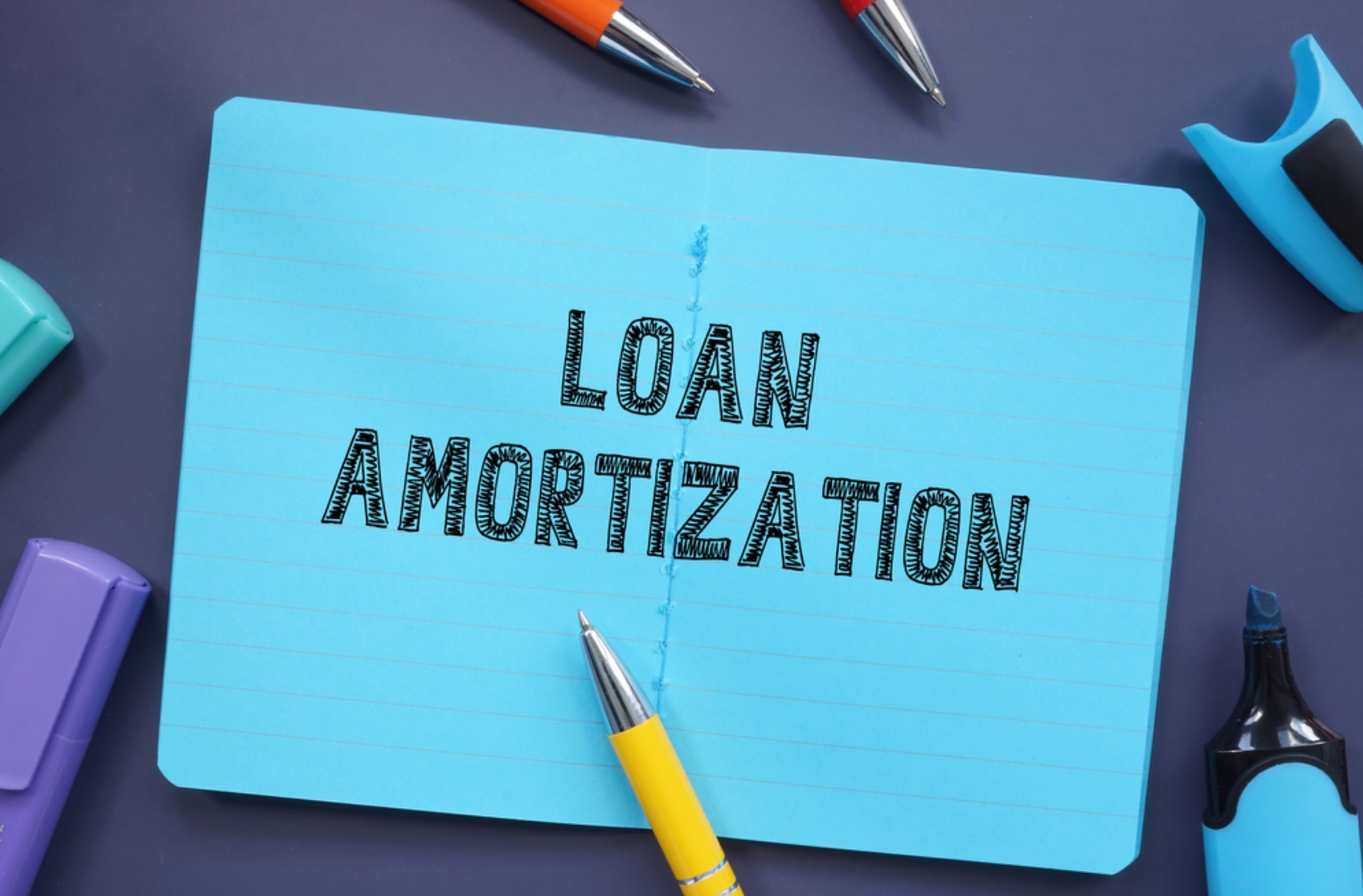 Loan Amortization – An amortizing loan is one in which the principal is paid down throughout the term of the loan (that is, amortized) in accordance with an amortization plan, generally through equal installments.

An amortizing bond, on the other hand, is one that repays a portion of the principal (face value) in addition to the coupon payments. In contrast, a sinking fund amortizes total debt outstanding by repurchasing certain bonds.

Each payment to the lender will be made up of both interest and principal. Mortgage loans are generally repaid over time. An amortizing loan is calculated in the same way as an annuity, using the time value of money formulae, and may be done with an amortization calculator.

An amortizing loan differs from a bullet loan in that a substantial amount of the loan is paid off at the final maturity date rather than progressively during the loan’s term.

A cumulative amortization loan indicates the amount of amortization expenditure claimed since the asset’s acquisition.

What Is Loan Amortization?

Loan Amortization is the process through which loan installments are applied to certain types of loans. The monthly payment is often the same and is divided between interest charges (what your lender receives for the loan), decreasing your loan balance (also known as paying off the loan principle), and other expenditures such as property taxes.

Your final loan payment will pay off the outstanding balance on your debt. A 30-year mortgage, for example, will be paid off after exactly 30 years (or 360 monthly payments).

Loan Amortization tables can help you anticipate your outstanding amount or interest expense at any point in the future and can help you understand how a loan works.

How Does Loan Amortization Work

A loan amortization chart is the easiest method to comprehend amortization. The table was supplied with your loan paperwork if you have a mortgage.

Scheduled payments: For the duration of the loan, your necessary monthly payments are specified separately by month.

Principal repayment: After you deduct the interest costs, the balance of your payment goes toward paying down your debt.

Interest expenses: Interest costs are deducted from each scheduled payment and are determined by multiplying your remaining loan total by your monthly interest rate.

Although your overall payment remains constant, you will pay off the loan’s interest and principal in varying amounts each month. The interest rate is the greatest at the start of the loan. As time passes, more and more of each payment is applied to your principle, and you pay proportionately less interest each month.

When the mortgage payment is less than the interest expense, negative loan amortization occurs. For instance, if the monthly interest payment is $1000 and the borrower pays $900, the remaining $100 is added to the principal each month.

Negative loan amortization, also known as delayed interest or graded payment mortgage, is a reversal phenomenon in which the principal debt rises if the borrower fails to make regular payments to meet the mortgage’s interest expense.

How Does Negative Loan Amortization Work

Set lenders will enable you to pay only a certain amount of interest each month, and any unpaid interest will be added to the loan’s principal. Capitalization of interest refers to the process of adding interest to the loan amount.

As a result, you must pay not only the interest on the principal amount but also interest on interest. This raises the total amount of debt as well as the interest rate on the loan. You must eventually repay the debt, which can be done in a variety of ways.

The primary goal of negative amortization is to lower mortgage payments at the start of the amortization schedule. On both fixed and adjustable-rate mortgages, it is utilized for this purpose.

The amortization schedule, also known as the amortization table, is a breakdown of the periodic down payments necessary to pay off the mortgage fully. Each monthly payment is the same amount and consists of two components: interest and principal.

You may learn about your monthly payments, the overall cost of borrowing, and how long it will take to pay off the loan by looking at the amortization schedule before applying for a house loan or a vehicle loan.

Most prominent financial websites provide mortgage and loan, amortization calculators. You may also use a formula to construct an amortization table in an Excel spreadsheet. There are several techniques for calculating the amortization schedule.

Structure Of A Loan Amortization Table

The loan amortization table is a chart that helps you keep track of your monthly payments according to the amortization plan. The schedule’s last line displays the total interest and principal payments for the whole term of the mortgage.

Columns in the loan amortization chart include planned payments, interest charges, and principal payback. Each row in the table represents a single monthly payment toward the loan, which may be divided into principal and interest.

Your monthly payments stay unchanged, and the final installment will pay off the remainder of your loan. Extra payments are made at the beginning of the plan by those who wish to pay off their house or vehicle loans faster.

It is a method of making extra payments towards the mortgage principal so that the borrower can pay off the mortgage before the settlement date and save a little money on mortgage interest. It is also known as accelerated amortization.

A borrower who makes extra payments every month may need to declare that the excess money should be used to reduce the loan principal rather than the next month’s loan payment.

Because these additional payments reduce the outstanding loan balance, the interest expenses drop with each successive payment. This contributes to a lower overall interest rate on the loan.

A balloon payment is a lump sum payment paid at the end of a mortgage or loan term. It is analogous to a bullet payment, which is used to make a single huge payment on fixed income instruments such as bonds.

Balloon mortgages typically have a fairly short term of 5 to 7 years, with just the interest component amortized during that time. The principal is paid in one lump sum at the conclusion of the term.

Balloon payments are more commonly found in commercial real estate than in residential real estate. At the conclusion of the term, the borrower has the option of making a balloon payment by refinancing the mortgage or making the whole amount in cash.

Balloon payments allow you to make smaller monthly payments for a shorter period of time. If interest rates are higher at the start, the borrower may be able to refinance the balloon payment at a reduced interest rate at the conclusion of the schedule.

Straight-line amortization is also known as linear or fixed principal amortization since the principal payment amount remains constant month after month. However, the interest rate changes depending on the outstanding loan sum.

Mortgage style amortization is also known as constant payment or equal payment amortization since the monthly installment payments stay constant throughout the life of the mortgage.

The installment payments are consistent, however, the principal and interest amounts are not. The interest component is greater at first and progressively lowers as the outstanding loan balance diminishes.

The amortization plan for your line of credit will show you the entire length of your repayment period as well as the amount of money you must repay throughout each month. Lines of credit are typically unsecured, however, certain lenders may require collateral.

When the interest rate differs from the coupon rate of such fixed-income assets, investment amortization typically includes fixed-income instruments acquired at a discount or premium to face value.

It calculates the real interest rate by assigning the whole premium discount to each interest-paying period. The face value will be equivalent to the outstanding value once the investment has been fully amortized.

Refinance amortization is a way of refinancing an existing mortgage without having to restart the loan. It can assist you in lowering your monthly payments in a low-interest-rate climate.

It is also referred to as loan recasting, and it requires you to pay a certain amount against the principal balance of your mortgage. This expedites the repayment of your mortgage and recalculates your monthly payments to reflect the new balance.

The amortization amount is determined by subtracting the cash paid for interest from the estimated value of the bond’s interest.

Accumulated amortization is the total amount paid overtime to diminish the value of an intangible asset.

When an intangible asset is depreciated, the value connected with the cumulative amortization is deducted from the balance sheet as well.

The process of amortizing insurance coverage throughout the life of the policy is referred to as insurance amortization. The insurance policy’s amortization term is the time period over which the policy provides coverage.

For mortgages and loans, self-amortization is the default structure. A self-amortizing mortgage is one in which the borrower pays out the principal and interest on a regular basis until the loan is paid off. It is sometimes referred to as complete amortization.

The borrower does not repay the principal for the whole amortization schedule while using interest alone amortization. The principal is paid off in a lump payment at the conclusion of the maturity period. Partial amortization is another term for it.

Bond amortization, also known as debt amortization, is the process through which the principal and interest on a bond are paid at regular intervals during the life of the bond.

Fixed-rate amortization applies to fixed-rate mortgages in which the interest rate remains constant throughout the mortgage term. It aids the borrower’s financial planning because the monthly installments stay consistent.

Assume you spend $10,000 developing and building a machine. You patent the machine, and the patent lasts for five years. In this scenario, you must record $1000 as a yearly patent amortization expenditure.

If you want to understand how borrowing works, look at loan amortization. Consumers frequently base their selections on a reasonable monthly payment, but interest expenses are a better method to determine the true cost of what they buy. A smaller monthly payment might often entail paying more in interest. For example, if you extend the repayment period, you will pay more in interest than if you had a shorter payback term.

It is simple to compare different loan choices when the information is put out in a loan amortization table. You may compare lenders, select a 15- or 30-year loan term, and decide whether to refinance an existing loan. You can even figure out how much money you’d save if you paid off your debts sooner. Most loans allow you to avoid paying all remaining interest charges if you pay them off early.

Don’t assume that a conventional loan amortization schedule includes all loan data. Some loan amortization tables include extra loan information, such as closing costs and cumulative interest (a running total that shows the total interest paid after a specific period of time), but contact your lender if you don’t see these details.

The practice of spreading out a debt into a series of set installments is known as amortization. At the conclusion of the payment plan, the loan is paid off.

A portion of each payment is used to interest expenses, while the remainder is applied to your loan balance. You pay less interest and more toward your debt over time.

A loan amortization chart might assist you in comprehending how your payments are utilized.

Auto loans, house loans, and personal loans are all examples of amortizing loans.

You Shouldn't Miss This:

Join us on social media